Rob and Ashley have been in the dude ranch industry since 2006, joining Red Horse in 2008 and becoming Ranch Managers in 2015. After leaving the Midwest, Rob and Ashley met each other at 4UR Ranch in Creede, CO soon after college. Their desire to explore North Idaho and pursue their passion for dude ranches, hospitality and the great outdoors with each other is what led them to Red Horse Mountain Ranch. The care and gratitude they exude at the ranch extends to the guests, staff and into the community. The Farmers love to see guests make amazing memories that mirror the ranch’s mission: reconnecting people to the important things of a life well-lived. They are proud to hear the guests call the ranch home and be part of our family for the week. Their favorite things about Red Horse are the team who works alongside them and witnessing the lifelong relationships created. All this stems from inspiring staff to work their hardest and create the best version of themselves. Rob and Ashley also have a strong family focus. In addition to working alongside their brothers each season, they were also married on the ranch in 2012. Their children, Lane and Gavin, were introduced to Red Horse’s outdoor adventures and they are grateful their kids have the opportunity to grow up enjoying the ranch as home. Lauren, Kitchen Manager and Pastry Chef to the ranch, came from Lakewood, WA before gaining her culinary experience and education through the Western Culinary Institute in Portland, OR, a former Le Cordon Bleu school. In 2007, she found her way to Red Horse through an internship requirement for graduation. Since Lauren had never been to Idaho, it seemed like an interesting place to spend a summer, and in her words, “I never left!”. One of her favorite things about being part of the ranch is the opportunity to meet new people and watching them fall in love with Red Horse Mountain Ranch, just as she had so many years ago. She also claims to have the best office view of the valley. Outside of work, Lauren enjoys spending time with her husband and three sons. Tim is a man of many hats, about to spend his 14th season at the Ranch in 2022. Raised in Sheldon, Wisconsin, Tim meandered his way to Idaho through many adventures and it was ultimately his sister Ashley that convinced him to come “hang out in Idaho for the summer” with her and Rob. In 2012, Tim was hired as a Pantry Chef, with minimal prior experience. Given the nickname “Google Chef” for his ability to create out of thin air, Tim became motivated to improve his skills and began spending winters working under talented and humble chefs at various resorts throughout the country. During the summer, Tim would return to Red Horse as a guide for several activities and has been a valuable ranch hand in the off season. “Idaho is rich in community and outdoor experiences. I take solace in its mass of public land and rivers; fishing, hunting and mountain biking through the seasons”, he states. Another big reason for Tim staying so long is Idaho’s stunning beauty and ability to attract sensible folk. In his spare time you can find Tim working on batches of sauerkraut, kombucha and kimchi, stemming from his love for Microbiology. Tim’s mantra is “Comparison kills Contentment”. Also, you may catch him kicking back with Princess Bride playing in the background. Jimbeau, is the longest tenured staff member at Red Horse. Seeing the ranch change hands through the years, Jimbeau has played a constant role in the Property and Building Maintenance team. Jim’s upbringing as a New Englander provided him with numerous skills that helps the ranch keep up appearances and functionality. He is also known as the best bonfire maker west of the Mississippi. Of the countless memories Jimbeau has at the ranch, his favorites are meeting new people, making great friends, and guests expressing their sadness to leave because they loved their stay so much! Outside Red Horse, Jim loves spending time outdoors, hiking, camping, hunting and sprucing up his property in town. Mandy is a native New Englander who relocated to the Inland Northwest in 2016. Versed in insurance, television and the hospitality industries, she began working at Red Horse in 2018, eventually finding her niche as Reservations Manager. Introduced to the ranch by her cousin, Jimbeau, she was quickly adopted into the ranch family as one of their own. Mandy’s favorite memories about the ranch are making connections with people from all over the world and having some of the best colleagues, ones who share a simple life and being kind to others. Outside the ranch, Mandy enjoys traveling to National Parks, hiking, going to concerts and rooting for New England sports teams. She loves to surround herself in the year-round beauty of Harrison with her fiancé and twin daughters. Fun fact: Thanks to a 4th grade music teacher, Mandy can name all 50 states in alphabetical order. 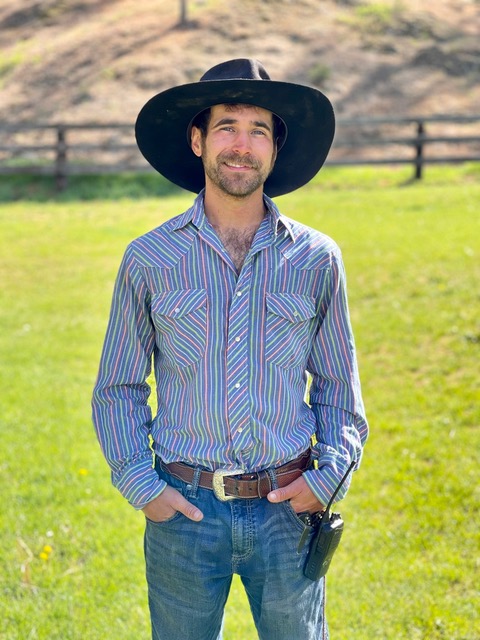 “Tex” is another man with several hats around the ranch. Originally from Huntsville, TX, Jonah brought his skills to us after graduating from Sam Houston State University in Agricultural Engineering Technology and Secondary Education. He came to us in 2018 as a wrangler, and became a trusted ranch hand, as well as working part time with our maintenance team in the off season. In 2021, Jonah moved into the role of Barn Manager and currently oversees our outstanding staff of wranglers each season. Idaho is the perfect fit for Jonah’s love of the outdoors. You may find him hunting, fishing and hiking in his down time, and if you’re within earshot, a spontaneous belting out of any Garth Brooks tune may be heard. A native Oregonian, Arielle joined the team in 2020 as Herd Manager, providing us with her extensive knowledge and experience in professional horse training. Being provided the opportunity to live her dream job attracted Arielle to Red Horse and she has wasted no time getting to know the herd. Her degree in Agricultural Business Management, and never-ending love for her horses outside work hours, make her a great fit here. You can find her showing horses in reining, jumping and barrel racing, but her secret talent is making canine balloon animals! A personal motto she shared with us- “you can learn something from everyone, even if it’s what not to do.” If you’re a repeat guest to Red Horse, odds are you know Idaho’s very own Daniel and his trusty sidekick Hilary as integral components in the ranch environment, sharing our mission to reconnect people to a life well-lived.  Daniel was introduced to the ranch after Hilary spent 3 seasons with us before marrying and embarking on their joint venture at Red Horse.  He then fell in love with it, too, finding meaningful life through staff family and friendships, getting lost in the woods, dancing, live music and “endless wonderful shenanigans”.  In 2021, Daniel stepped into the Hospitality Manager role and, along with Hilary, has been leading our energetic and caring hospitality team to provide you the best experience possible during your stay. Together, they are our longest tenured seasonal staff and can share countless memories of the ranch. Be sure to say hello to this dynamic duo on your next adventure! Known as “Ya-Ya” to most fledglings, Jennifer doesn’t fall short on delivering her skills to the ranch while embracing the culture of a small community. Born and raised in Missoula, MT, Jennifer spent her earlier years traveling the world while expanding her education. Her Aviation and Early Education studies brought her to 40 states and 8 countries, teaching a variety of grade levels. She began at the ranch as the star Super Nanny in 2018 and has since dabbled in the Kitchen, Hospitality, Office, Kids Program and Maintenance (on top of caring for Rob and Ashley’s kiddos). Did we mention Jennifer loves the outdoors? “Being in, on, or around the mountains and water” makes her smile wide. Her goals for the upcoming season include fly fishing on the St. Joe River, jumping in each of the Coeur d’Alene Lake chain lakes, practicing guitar and learning the names of a few more horses.